Emotional Test Prep 101: Breathe Through It

Part V of our series on “Emotional Test Prep”

So your students are in the right mindset, they’ve made studying more fun, and they understand what’s happening in their bodies when they’re dealing with test anxiety.

Now, what do they actually do when test anxiety hits them in the middle of the exam? Well, they have some options, so introduce your students to all of the methods we’ll discuss in this blog post to be sure they have every tool they need to stop test anxiety in its tracks.

Teach your students “box breathing.” Also called 4x4 breathing, this is a classic stress relieving technique used by Navy SEALS to help them prepare for combat—not the worst analogy for standardized testing, to be honest.

Multiple studies show that breathing exercises like this one stimulate the vagus nerve in a student’s brain, not only calming the “fight or flight” response in the parasympathetic nervous system that causes so many students to shut down or feel overwhelmed, but also improving their alertness and concentration.

Help students create their own centering phrase. Whether it’s a simple “I got this” like Olympic gymnast Laurie Hernandez or “This is just one question on a test; I know that I can get this right and if I don’t, it’s not the end of the world” (see our blog about growth mindset for more on this topic), a centering phrase can also help students gain confidence and lower their anxiety. Jeopardy! superchamp Amy Schneider thought of the lyrics to Eminem’s “Lose Yourself” to get herself in the right mindset—hey, whatever works.

You might have heard these phrases referred to as mantras, affirmations, or even scripture, but whatever you call them, the effect is the same: Centering phrases have been shown to lower your respiratory rate (back to breathing again) and slow your heartbeat, two of the most common physical symptoms of test anxiety.

It’s best to create these centering phrases ahead of time and practice using them with your students in less stressful situations so that their brains can rewire and calm down when a student thinks/says that phrase. 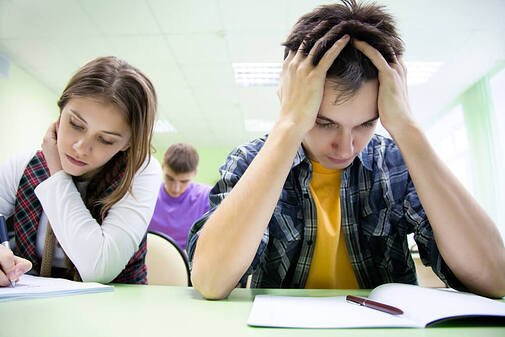 Encourage students to move their bodies during test breaks. Most big standardized tests (like the ACT and SAT) are several hours long, with a few short breaks between subjects. It might be tempting to believe that “staying in the zone” and remaining in your seat during those breaks is the most effective strategy.

The thing is, adrenaline builds and builds in our bodies when we’re under stress, and it can lead to those nervous jitters if it’s not released—a.k.a. if you remain in an uncomfortable chair at a desk for 3+ hours. Have you ever been on a deadline or in the middle of an important project when you suddenly noticed your hands shaking uncontrollably or getting sweaty, even if you thought you were managing the stress well? That’s probably the sign of pent-up adrenaline.

While students won’t be able to run laps around the testing center during breaks, they can get up, walk around the room, shake out their limbs, and stretch out their hands—there are few things worse than getting a writing cramp in the middle of your essay because you forgot to stretch your hands after all those multiple-choice sections.

For a 2-in-1 hand stretch/stress relief combo, therapist Robin Gluck recommends the “starfish meditation,” in which you stretch the fingers of one hand out as far as possible (like a starfish), then use the pointer finger of the other hand to slowly trace up and down your outstretched fingers. Bonus points (from us, not the ACT or SAT, unfortunately) if students practice their centering phrases or focus on deep breathing while they do this exercise.

While there’s no magic trick students can learn to prevent test anxiety altogether, these strategies will help them know what to do when test anxiety strikes so they can remain in control and stay focused on acing the exam.