Why do I get so shaky when I’m taking a test?

Why does my stomach feel upset on Test Days no matter what I eat for breakfast?

Why do even the most well-prepared students experience test anxiety?

These are all good questions, so let’s discuss some answers because we here at Shmoop believe that information can be a strong weapon in fighting test anxiety. In other words, if students can understand what’s physically happening inside their bodies while they take a major exam, they’re more likely to see test anxiety for what it really is—an automatic biological response to stress—and less likely to psych themselves out in a way that hurts their performance on the exam.

As every person who’s ever cheered when it’s “DVD/VCR player day” in class (or seen the updated remake on Netflix) knows, the best way to study internal body processes is with a field trip on a very special bus—the Magic Shmoop Bus, of course. (Names have been changed because we don’t have the budget to hire Lin-Manuel Miranda to sing our theme song.)

As we mentioned in our intro post a few weeks ago, the main culprit behind test anxiety is the hormone cortisol. Cortisol is produced in the adrenal glands, just above your kidneys, but let’s back up even further in this process. What triggers cortisol to be released in the first place?

It all starts with the amygdalae, a pair of small regions in the brain that are part of the limbic system. You may have heard the limbic system referred to as the “lizard brain” before because lizards don’t have higher cognitive functions beyond this system—except maybe Liz.

The job of the amygdala is to recognize and respond to threats, and it assesses all threats in the same way, whether you’re being chased by a T-Rex or struggling with a question about the Pythagorean theorem. The amygdala’s work is subconscious, meaning test-takers aren’t even aware of what’s going on deep down inside their lizard brain.

Your students may find this lack of control frustrating, but it’s also somewhat freeing to know that there truly is nothing you can do to stop the amygdala from sending its “fight or flight” signals in times of stress. To put it another way, students, it’s not “your fault” you experience test anxiety; your nerves don’t mean you should have studied more or that you don’t know the material as well as you thought you did. It’s just your amygdala in its prehistoric freakout mode.

When the amygdala enters freakout mode (not the scientific term), it basically starts a game of Telephone inside your body. First, it sends a signal (“Ahhhhh!! Threat detected!!!”) to your hypothalamus, another region of your brain that controls your hormones. In turn, the hypothalamus sends a telegram down the nervous system to the pituitary gland, a pea-sized gland at the base of your brain, and that telegram says, “We need backup now!” The pituitary gland is also called the “master gland” because it’s like a command center for the entire endocrine system. When it receives that message from the hypothalamus, it activates the endocrine system and asks the adrenal glands to produce three hormones: epinephrine, and norepinephrine, and cortisol.

When students start feeling shaky or jittery in the middle of a test, it’s because they’re experiencing surges of adrenaline preparing them to act, but they can’t act because they’re stuck in a hard metal chair trying to focus on answering questions. 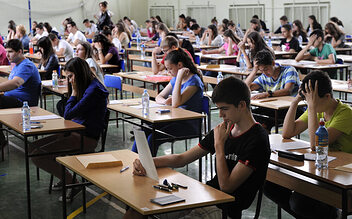 Meanwhile, a study published in the Journal of Neuroscience found that patients with increased levels of both norepinephrine and cortisol were more likely to have a negative emotional reaction to situations—so, if students are feeling a bit nervous and then they get to a tough question they have no idea how to solve, the combination of norepinephrine and cortisol in their bodies might send them spiraling into a panic or cause them to start beating themselves up mentally for not being further along in the test.

So there you have it—the three biggest culprits behind test anxiety, revealed at last: adrenaline, norepinephrine, and cortisol. While students may not be able to control how often their amygdala freak out and trigger the chain reaction that sends these stress hormones surging through their bodies, try encouraging them to use their self-talk to identify which hormones are causing various symptoms of anxiety.

“Even though I’m feeling shaky, I’m okay. I know the jitters come from the adrenaline in my body that’s telling me to run away.”

“Yes, I had to take a total shot in the dark on that last question, but that doesn’t mean I’m doomed to fail or I won’t get the next question right. That’s just a combination of norepinephrine and cortisol messing with my head.”

Your students might be surprised how much that knowledge helps them to cope with their physical reaction to test anxiety. As we always say, knowledge is power.

Great information! I look forward to using some of this info in the Spring when my students take the ACT Test for the first time.