Emotional Test Prep 101: Trust Your Gut Most of the Time

Part VI in our series on “Emotional Test Prep”

Particularly on high-stakes tests like the ACT, SAT, and AP exams, there’s nothing more frustrating than talking yourself out of an answer, only to find out later that your first instinct was actually correct.

Of course, that’s not to say students should “trust their gut” for the entire process—if they’ve never heard of the quadratic formula, they’re not going to be able to just guess how to solve equations requiring that knowledge. Beyond that though, students should familiarize themselves with the actual types of questions and answer choices they’ll see on the test, whether that’s through in-class skill drills or at-home practice tests.

When you know you’re well-prepared for an exam, research actually supports the idea that listening to your guts is a good strategy. We’ve thrown a lot of shade at the amygdala—that almond-shaped region in your “lizard brain”— in this blog series for its role in creating test anxiety, but its penchant for survival above all else can sometimes help guide students into making an unconscious decision, provided they’re willing to trust it.

Psychiatrist Antoine Bechara and his colleagues studied this phenomenon through an experiment called the “Iowa gambling task.” The researchers gave participants a stack of $2,000, then asked them to choose a card from one of four decks, each card marked with either “reward” or “punishment;” so, they’d either win or lose money depending on the card they chose. The participants were told to keep drawing cards (up to 100 times) and collect as many rewards as they could, but given no instructions on how to do so.

Unbeknownst to the participants, the researchers added a twist—the decks had different ratios of “reward” and “punishment” cards, so some decks would be more likely to result in reward than others. Researchers found that after just 10 selections, many participants’ brains started showing a “stress response” when they considered drawing from one of the “bad” decks. However, some participants talked themselves out of their inner sense and continued to try those decks repeatedly—and surprisingly, those participants tended to have higher IQs. Researchers theorized that this phenomenon might be because people with higher IQs are used to thinking their way through problems instead of “feeling” their way through, so even though they also had the same innate hunches from their amygdala about how the decks worked, their brains chose to ignore those hunches. 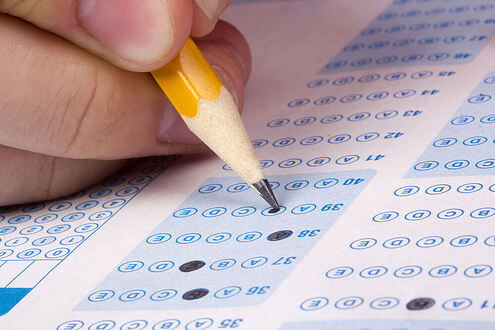 In the world of test prep, the Iowa Gambling Test confirms the idea that somebody can be intelligent and still perform badly on a test because they talk themselves out of trusting their intuition. So how can teachers help their students stop sabotaging themselves (and their scores) on important tests like the ACT/SAT?

Academic success coach Adam Sanford came up with a creative exercise to combat this problem: Give the student a quiz or a skill drill. As they work through each question, have them rate their confidence level in their answer on a scale of 10 and include the reason for their score. For instance, “I am 3/10 confident in my answer because I didn’t do well on my last quiz about right triangles” or “I am 9/10 confident in my answer because I know there’s a comma splice in this sentence.”

Then, grade the quiz and help the student compare their confidence ratings with how they actually scored. If there’s a disconnect between the two, encourage them to think about why. Are they overestimating their knowledge of a particular subject, causing them to study less? Or—more likely for students struggling with test anxiety—are they being too hard on themselves and ranking their confidence levels too low when they actually get questions right?

It’s also worth noting that if a student’s confidence ranking lined up pretty well with their score—so, they felt less confident about questions they missed—that’s still something to celebrate regardless of how they actually scored on the quiz because their gut is pointing them in the right direction.

When they get to the test itself, Sanford recommends encouraging students to commit to limiting the number of times they’ll “allow” themselves to second-guess an answer—maybe 2-3 times for sections where they feel less confident and only once for their best subjects. Once they’ve used up their second-guess allotment, ideally, they’ll honor their commitment and rely on their gut the rest of the time.

On important tests, eliminating every possible source of test anxiety helps, and second-guessing is one of the most nefarious sources out there. Hopefully, these tips will help your students walk into the testing room with guts.