Part IV in our series on “Emotional Test Prep”

Studies from the APA show a progressive rise in teen stress over at least the past decade—and high-stakes testing has no doubt played a part. In her book Beyond Measure: Rescuing an Overscheduled, Overtested, Underestimated Generation, Vicki Abeles describes today’s youth as “the most tested generation in history” (110). Abeles cites the example of a 16-year-old organizer named Philip, who gathered with friends to protest his school board’s recent decision to cut electives and study periods from daily schedules to make more time for preparation in core academic subjects:

“Today’s system doesn’t think of any of us as the boy who loves music, but instead the boy who has a 1600 SAT score and a good amount of extracurriculars. Are we not the leaders of tomorrow?” (Abeles, 264)

Philip’s complaint underscores a major challenge and symptom of high-stakes testing: Because they can appear to have a significant–in fact, profound–impact on a student’s opportunities, high stakes tests do more than assess knowledge; rather, they can function as extensions of a student’s identity.

Moreover, Philip’s reasoning here reflects his perspicacious grasp on the systemic logic that turns individual kids into statistical abstractions. The tendency to overidentify with test scores is not simply an individual pathology or “obsession” with numbers, but the symptom of a system that encourages and in many cases requires students to see themselves through the lens of their test scores. Simply put, it’s not just “him,” but the system itself.

Students come by these perceptions honestly enough. Part of students’ anxiety surrounding tests comes from the simple ways we hype them up. “If you don’t do well on this, you won’t get into a good college.” “The final exam counts for 20% of your grade, so be prepared.” While those statements might be true to an extent, magnifying in students’ minds won’t help them succeed.

In an article for Harvard Business Review, clinical psychologist Meg Jay encourages a student not to catastrophize, or imagine the worst outcome possible. She tells the student to focus on “what is, not what if”—what is actually happening (I have done everything I can to prepare for this test) instead of what might happen in the future (what if I fail?). 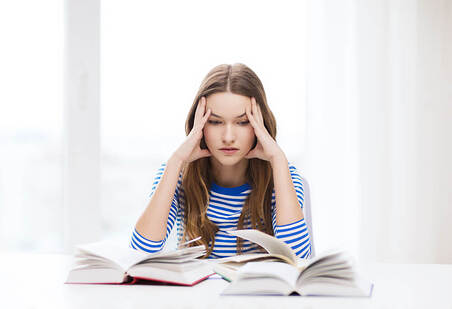 As teachers, we can help remind students that this test is not the end of the world. Students who score higher aren’t guaranteed success in life, and students who score lower aren’t doomed for misery. In fact, studies show that performance on standardized tests have no bearing on performance or success in college, despite their pivotal role heretofore on college acceptance.

To help students prepare without catastrophizing, try “gamifying” your test prep: See who can come up with the catchiest song or acronym to remember important facts, give smaller skill-based quizzes so students know what to study, or lighten the mood with some humor. Brown University’s guide to managing test anxiety even suggests encouraging students to view the entire test like a game, with the goal to collect as many points as possible—rather than a “make-or-break” exam that will determine the entire course of their future in the span of a few short hours.

With prestigious schools like Harvard and UC Berkeley dropping the requirement that students submit ACT/SAT scores with their college applications and the College Board’s announcement that the SAT will be offered digitally starting next year, it’s possible that soon we may see a national shift away from the reverence for and emphasis on high-pressure, high-stakes testing. In the meantime, helping students adjust their own expectations will empower them to realize they have so much more to offer the world beyond their ability to take a standardized test.